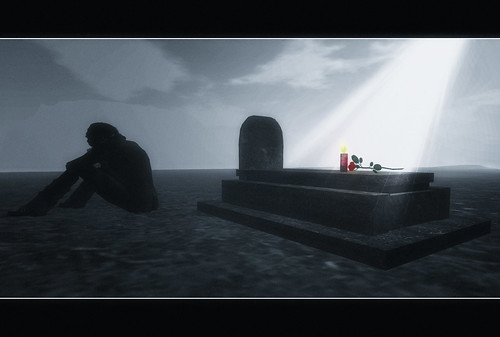 The last thing Death wanted to do was grow up, no matter what the adults said. What could that even mean for someone like him? Death did his job. He traveled to the beds of aging widows in their moment of despair, took them by the hand, and carried them off to his Fields. He delivered the final moment to the swarms of things eaten by plague, or consumed by exploding stars.

Death didn’t spend much time with the others. It wasn’t because he was anti-social, or a loner by nature. Everyone else was just so boring. Matter lacked imagination, Entropy was too pessimistic. The less said about Momma the better.

Life told him she didn’t regret having him, but Death didn’t believe her. All they ever did was argue. There wasn’t a single subject that they agreed on. Even the ones where Death was obviously right, which was most of them. She was smart. He had to admit that. He respected her, in that way where you’d use a different word than “respect” if there was one because it wasn’t quite right.

The other youngins weren’t any improvement, far as he could tell. Light was so self-righteous, and cousin Gravity was just too dense. The pun always made Death laugh, but none of the others appreciated it. No one except his uncle.

Out of all of the adults in the universe, the only one worth hanging out with was Uncle Time. Uncle Time had been around longer than any of them. He was deep, but in a kind of strange way that somehow didn’t make him dull. Just about every worthwhile conversation Death ever had was with his Uncle Time.

“Just how old are you?” Death asked him one day, as he danced around the edge of a black hole as it drank up the remains of the last Living Nebula.

“Older than you will ever be, boy,” said his uncle.

Death scrunched up his face. “How can that be? Sometime I’ll catch up to where you are now.”

Time laughed, and it sounded like a thousand thousand old men, laughing so quietly a body could hardly hear it at all.

Death let that bounce around his skull for a few minutes, then nodded.

“That makes sense. Uncle Death, why are you the only one who ever talks sense to me? The others all treat me like I’m a little kid. Even Momma, who ain’t so much older than me, the way folks like us reckon it.”

“Do you think age matters, to our kind?” asked Time.

“I suppose not,” said Death.

“They don’t treat you like a boy because of how many or how few stars have gone out since you came into being. Or of how many life forms you’ve kissed goodbye.”

“They treat you young because you have not grown up yet.”

Death laughed. “Folks like us don’t grow. Everybody knows that.”

Death thought about that. “Even you?”

Time nodded, and Death saw the rising and setting of universes in his uncle’s brow.

“I change. I’ve already changed, and I’m done changing, and it all unfolds in this moment. But I change.”

“But what about you? Why don’t you treat me no different?”

“You know the answer,” said Time. “It is already here.”

That was something else Death liked about his Uncle. He didn’t spell everything out so plain it’d be clear to anyone, no matter how dim. He didn’t treat Death like a moron. Death reckoned that might be because Time knew for a fact what his nephew would and wouldn’t figure out for himself, but he appreciated it all the same.

It did mean Death had to put a bit more thought into his conversations with Time than he did at other times. Taking lives came son natural—he was what you might call a prodigy. But this deep thinking, that was a challenge. But it was worth it. So Death sat there and thought, long and hard, before he answered.

“You don’t treat me different because, because you know what I’ll be like when I’m grown up?”

Time smiled every smile that had ever been or would ever be smiled.

“Are you in such a rush to change? Do you not relish your youth, of prancing through the graves of the lifeforms and species you have brought into your fold?”

“I can still do that when I’m grow’d up,” said Death. “I just wish the others would respect me. Like they do to…each other.” He stopped himself from saying, “like they do to Momma.”

“But I figure you already know whether you are gonna tell me or not,” said Death, grinning.

By the light of the dying stars, Death once against saw every smile that would ever be adorn his uncle’s face.

Death stopped himself from opening his mouth and forced himself to ponder. That’s what his uncle would advise, and he was the smartest man Death knew. He let it the thought roll around him for a few decades. It didn’t matter much. His conclusion was the same as it would have been had he spoken right away.

“Very well,” Time took a deep breath, and exhaled the beginning and end of of everything. “You will grow up when you get an education.”

“You sound like Momma. What am I supposed to study, then? How to sew myself some better robes?”

“You are to study medicine.”

“Medicine?” Death spat the word out like a child forced to eat his sprouts.

“But I hate medicine. I’m Death, for dying out loud. I make people die. Medicine is for making people live. For…for fighting disease. What would I want to go and do that for?”

Disease was one of the things Momma and he fought most about. He put it together when he was little, back when Momma didn’t care so much about him playing with her stuff. He thought she would be right proud that he’d found a way to make some of her tiniest and least interesting creations that much better, that much more capable of expressing themselves. To give them a new way of living. She wasn’t.

“You only see it that way because you’re young,” said Time, shaking the first third of the universe in dismay. “That is what the others see when they look at you. That is why they believe you immature. Medicine is not your enemy. Indeed, it will be one of your greatest creations.”

Death furrowed his brow. “My creations? But medicine already exists.”

“Something they call medicine exists,” said Time. “It is but a pale echo of what it will be. It its fullness, it will save and extend a great many lives, and allow those who use it to spread across the universe. In time, it will lead them to change themselves, remake their scions, and forge your mother’s work into forms unimagined in this frozen slice of moment.”

Death grimaced. “Why would I want that?”

As one, a trillion of oceans crashed upon a trillion shores, all to the sound of Time’s sigh.

That was Time favorite phrase. It contained within it infinite frustration, and infinite patience. Sometimes Death wondered how his Uncle put up with the rest of them. To see—to be–everything that would ever be, right now, and have no one to talk to but regular old temporal beings like Death. He asked his Uncle about that once, and he got the same answer. “Can you not see it?”

Death knew by this point that it meant a great revelation was hovering nearby, just out of reach. The problem was, “just out of reach” could be a billion years from now. It also meant that his uncle would not give him the answer. Perhaps he couldn’t, in some way that Death didn’t quite understand. He would have to get there himself. So he tried.

“If I study medicine…” he started, “and make it into something real serious—powerful, not like it is now–If I do that, then people will live longer. And…and they’ll have more babies.”

“And those babies won’t give up their ghosts so easily. So they’ll grow up to have more babies of their own.”

“Then…there’ll be more people,” he was starting to see it. The edges of it. He continued, excited. “More people born every day. More people alive in the universe, and more crops to grow, more livestock to feed. More wars to fight, more disease to spread.” He turned to his Uncle, his eyes wide. “If there are more people alive, more people will die! Every single day!”

Out in the universe, races and beings far flung and unrelated in space and time took their chisels and their hammers and their cutting lasers, and all of them carved the face of man they never knew, and would never see, every one of them smiling. And Death saw all of them, at once, in his Uncle’s face right now.

Death turned away. “But…medicine. It’s so…”

“Yes,” said Time. “I understand. This, what you say now, is very similar to what she said, when I had this conversation with her.”

“She?” asked Death. “You mean…you mean Momma? She had…she went through the same thing?”

“Nearly identical, and completely different. She, too, wished for respect.”

“The others, Matter and Entropy and those folks, thought Momma was immature?” Death couldn’t decide whether to laugh or gasp in surprise.

“What did, what did Momma create?”

Before his uncle said anything, Death already knew.

“My boy,” he said, with the calm of a billion cooling supernovae, “she created you.”

Death paused, and he pondered. For a time—short to him but lifetimes to others—he did nothing but ponder. Out in the universe, in a thousand civilizations, they called it the Undying Time, or the Golden Age of Life. A strange, impossible time where nothing and no one died. Their descendants would not believe it, and it would live on only as myths, and the fragments of memories.

Death knew all about change. Uncle Entropy might have invented it, but that was only the boring kind. Change didn’t have color, it didn’t have poetry, until Death got a hold of it. The kind of change that folks cared about, that they lived for, that belonged to him. He knew all about change. He knew that people thought it was slow. It wasn’t. All change, all true change, happened in an instant.

“I’ll do it,” said Death. “I’ll go off and create medicine. Proper medicine, like the kind what you said. I’ll do it. I want…I want to grow up.”

Time nodded in approval. Death loved that nod. Anyone could nod their approval at you all day long, but not everyone could make you feel it. Uncle Time made him feel it. He wouldn’t have taken no advice on how to get himself some respect from anyone else. Uncle Time treated him right.

No, that wasn’t quite it. Uncle Time treated him more than just right. He treated him like an equal. An equal? Could that possibly be true? Him, little Death, the equal of Time himself?

Just like that, Death had another major revelation. His fourth, he reckoned, just in this conversation. He would be the equal to his uncle. If Time thought it, then it must be true. To Time, right here, right now, he already was.