The Daily Post Weekly Writing Challenge this week is to write something inspired by three photographs. My piece is rather long, so I am going to split it into two, each with three different photographs. So it is two entries, in a sense. Here is the first part. 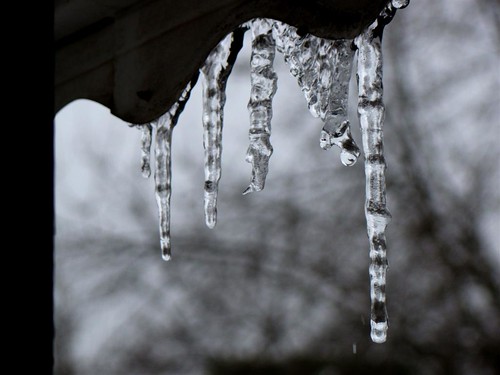 “At the beginning of time,” said the Acolyte, “the Seventh of the Blind Gods created the icicles.”

Silva did not know if she believed in the teachings. She saw the icicles in her dreams. Sometimes she woke up in the night, hot and cold, with spots of wetness on her chest. Like something dripped on her from above. It could not have been icicles. She had never seen an icicle. Not a real one. It was too warm. It was too dry.

Silva wanted desperately to see snow. When it was her turn to go out on the water collections, she wandered deeper into the Scoured Wastes than anyone else would go, to find the special caves. The caves with the colored walls like broken glass. She would wander deeply into them, mesmerized by the colors they gave off when she shined her electric torch at them. The first time inside she ran through her battery allotment for the whole month, just to point the torch and watch the colors dance.

She loved the air in there, too. It was soft, somehow. Soft and rich, with a scent like the piles of food waste gave off if they were large enough and she overturned them before they dried out. Only sweeter. When she returned to the Settlement from that first trip, all she wished was to go back to the caves as soon as she could. Maybe, deep inside, there would be snow. Nan was impressed Silva had filled all of her water pods, but very cross about the batteries. As punishment, Nan told Silva to go sleep as she could, because she would be on the next water collection the following morning.

Silva acted suitably stung by the admonition. Inside she brimmed with delight. Her lie to the Workmaster made Silva feel sooty and stained, but also thrilled. Even the paltry half lie was the first time Silva had ever engaged in deception. It was the first time she had ever sinned.

It would not be the last.

“The icicles stayed frozen for eon upon eon, age upon age,” the Acolyte droned on. “Past the War of the Chitinous, through the Great Sleep Beneath, long into the Age of Living Dust the icicles froze on. Not until the Dawning, when the betrayal of the First of the Blind Gods by his children evoked his anger and caused him to cry the sky aflame, did the icicles begin to melt. They melted, and their water dripped down onto the earth, and became the blood of the First People.”

There was no ice, anymore. And no blood. In all of the stories Silva had read in words or seen in moving pictures, when people cut themselves thick red liquid poured forth. Silva believed for far too long that the same was true of herself, and the others. Perhaps she was lucky to be so sheltered from anything that could hurt her, back then, when she was too young to venture into the wastes for water or biomass. The first time her skin broke it was by her own hand.

She wanted to know what was inside of her. Melor, the physicker, would not tell her. He said she was too young to worry about such things. So she dropped an empty bottle from the top of Ilor’s Spire, ran down, and picked up the jagged pieces. She sliced along her wrist, like the desperate heroines from the stories when they lost their loves. Only dust poured forth. Red speckled dust. It was too dry, even for blood to flow.

“The blood within the People was warm, and its flow spoke like the babble of a river,” the Acolyte’s voice filled the air, “it whispered secrets woven of light and shadow, color and shade. Secrets known only to the Gods, who could not comprehend them, for they could not see. The blood whispered, and the People listened.”

After the fifth time Silva returned from the water collections with her water pods full, Nan rewarded her with extra tokens, which could be used for more biomass for food, or more batteries for her devices, or to buy off tasks and gain more discretionary time. Silva’s three sisters cornered her in the library, armed with sting wands. They demanded to know her secret.

She tried to lie to them, to tell them there was no secret. But they stung her until she relented, and told them about the far ends of the wastes, and the caves with the crystal walls that were so rich in moisture. They scoffed at her. No one could travel that far into the Wastes. They would dry and shrivel, and the winds would pick clean their bones. No doubt they would have stung her further, had Anka, the keeper of the books, not wandered in just them. The sisters hid their wands, and told Silva they would return.

Silva spent all of her tokens on batteries, more batteries than she had ever had before. On the next water collection she went straight to the caves, and did not return for days. At first she was not sure she would ever return. But she realized quickly that was folly. These caves had enough biomass to feed her forever, but eventually her converter would run out of batteries. So would her torch. She would be left starving, in the dark, without even the dancing lights.

But she knew she could stay here for a long time, and have batteries to spare. She wanted to wander more deeply in the cave than she ever had before. Last time, along a particular pathway, she thought she heard music. This time she would find it.

As she traveled in and down the broken-glass stones jutting from the walls grew thicker, and sharper, and even more beautiful. Silva cut herself several times. The red dust from her wound mingled with a rivulet of water on the floor. Was this what blood looked like? Silva stared down at it for a long time, lost in elation. It was all she could do not to open up both of her arms, and pour her life forth onto the wet stone beneath. She shook herself from her reverie, and traveled on.

When she found the music, she realized she had been hearing it for hours and not realized. It wasn’t music. It was something else. This was to music as a drawing in the sand with a stick was to one of Anka’s metal carvings. Music was pretty for a moment, and then was gone. This was breathtaking, and forever. Silva raced towards it. She had to crawl over the sharp colored stones, now. They nearly filled the tunnels. Silva crawled through them for hours, as they took toll for her passage with their sharp edges. She didn’t care. The sound grew louder, and Silva was laughing by the time she reached it.

She emerged into a large passage. The music raged in her ears, chaotic and loud. The air was very wet, here, and very cold. As cold as the nights in the Wastes, or colder still. Silva walked towards the music. She did not have to walk far. She shined her torch ahead, and saw it. A great raging torrent of water, longer across than she was tall. She knew what it was from the stories and the pictures. With glee, she raced towards it. Something crunched under her feet.

She reached down to touch it. It was cold, and dry. No, wet. Dry for a moment, like powder, and then wet like water between her fingertips. Realization flooded into Silva so suddenly she nearly drowned. Beneath her feet, the ground was covered in snow. Where had it come from? Didn’t snow fall from the sky? Had she wandered outside, through the caves and into another world sliced open with cold rivers and covered in snow?

Silva look upward expecting to see sky, or even stars, but there was just darkness. She shined her torch up, but the colored stone extended all the way to the top. The ceiling was even more beautiful  than in the rest of the cave. The light from her torch bounced off the edges onto the river, which scattered it all around her. If she angled it just right, Silva could see quite well. Over there, the river disappeared into an opening in the far way. And over there the stones were rounded, and the colors homogenized into a hundred shades of blue. And over there…Silva gasped and dropped her torch. She picked it up again, and pointed. She did not want to believe her eyes, but they had never lied to her before. They were there. As sure as she was.

Just on the other side of the river, jutting like glass teeth from an outcropping of stone, there hung seven jagged and terrible icicles.

13 thoughts on “Seven Icicles, Part One”